Synergent’s mission is to ‘help credit unions succeed and improve the financial lives of their members.’ In our monthly Employee Spotlight series, we feature one of our dedicated staff members to help you get to know the people who are working as an extension of your credit union team. 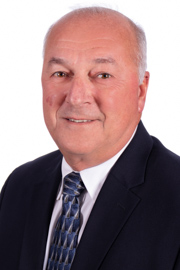 Tim Gilman, Vice President – Information Systems, will celebrate 30 years with Synergent on September 1. He has served as an integral, knowledgeable member of the Synergent family throughout his time here. From integrating OpCon to managing the Information Systems department, his efforts have helped credit unions, coworkers, and the enterprise as a whole.

Gilman has been working in the technology field for over 40 years, starting down this path when he graduated high school and joined the U.S. Air Force. In reviewing career opportunities with his recruiter, he decided to pursue Computer Operations.

“I have been blessed with a vibrant career and have evolved along with technology since 1980,” explained Gilman. “It has been a very fulfilling opportunity to work directly with systems and software to drive efficiency and make people’s lives easier.”

Gilman started as a third shift Computer Operator at Synergent. In the time since, his role has grown considerably. In the mid- to late-1990s, he was promoted to the Operations Supervisor role, a position that was created for him due to the company’s growing need for a leader of the daily operations team. Eventually, he chose to move away from holding a technical role when a new opportunity arose in 2003.

“I moved from technical positions into leadership in 2003 when I accepted the position to become Manager of Operations,” stated Gilman. “Since then, my area of leadership responsibility has expanded significantly.”

This moment in 2003 was pivotal for Gilman, having to choose between remaining on a technical track or joining Synergent’s leadership team.

“I feel strongly that the past 18 years in management will always be the highlight of my career at Synergent,” reflected Gilman. “I chose to make this move in the face of us changing the hardware platform we had been running for 30+ years, as well as the core software moving to Symitar’s® Episys®. Although I knew it was a large commitment to take on, I felt strongly that I could help us grow forward and overcome challenges.”

A role in management has proved enriching for Gilman, as he says that he has thoroughly enjoyed the people side of team management.

“I have had a hand in interviewing, hiring, and promoting most of the staff within the four teams in Information Systems that I oversee,” said Gilman. “It has been most rewarding to watch our teams grow, as well as each employee. When you see their successes, it is fulfilling when you gain an internal sense of supporting their growth and success.”

When switching to the Symitar® Episys® core processing system in early 2005, the team identified opportunities to automate and streamline processes for the 14 credit unions on the platform at the time.

“I pushed our team forward to implement SMA Technologies’ OpCon to integrate robust automation opportunities and drive our daily operations through software, eliminating the potential for human error in manual processes,” explained Gilman. “This automation software allowed us to build in a direction of dynamic processing driven through their software and robust scheduling engine. We were able to get really creative and set up schedules to initiate processing during overnight and weekend hours when our operators were not working.”

Since the implementation of OpCon in September of 2005, Gilman’s team’s operations have been driven by over 236 million automated jobs, tasks, events, etc.

“Our team received the 2006 Automation Engineer Award from SMA and we presented our journey as part of their User Conference,” exclaimed Gilman. “Additionally, I worked hard to bring SMA and Symitar® closer together, as the benefits we received could benefit other credit unions on Episys® across the country.”

Gilman notes his work implementing OpCon as one of the proudest moments in his career. Implementing it provided the ability to easily migrate all credit unions to Episys® . Integrating OpCon to drive processes within Episys® helped Gilman and his team identify and work past potential manual errors prior to implementation.

“Being mostly in the back-office area of operations, my role does not tend to show the direct impacts that are seen with many of the areas of our organization,” said Gilman. “However, our impact is delivered 24x7x365 with reliability and secure delivery of products and services to our many credit union clients.”

Gilman attributes his favorite part of his job to “having the opportunity to help grow and expand the success of our organization, our employees, and our credit unions.” His hard work managing the Information Systems department assists both Synergent and its credit unions in advancing and reaching goals.

“I have gained a tremendous amount of knowledge regarding working in the financial sector and the importance of providing service success to our credit union clients,” said Gilman. “Additionally, I have gained significantly and learned a great deal from the managers I have grown under, and from our leadership team throughout the organization.”

When he is not leading the Information Systems department, Gilman enjoys spending time with friends and family, traveling, fishing, golfing, softball, gardening, and the beach.