It’s no secret: we create award-winning campaigns for credit unions of all sizes across the country. And while the ranking will be revealed at the upcoming CUNA Marketing & Business Development Council Conference in Las Vegas, the recipients have been announced. This year, our talented team helped five credit unions create Diamond Award-winning campaigns! To date, we have produced 33 campaigns that have won Diamond Awards!

“Working with credit unions to produce effective, data-driven campaigns is rewarding enough,” shared Shannan Heacock, Senior Marketing Services Representative. “To be recognized by a prestigious institution like CUNA for that work is icing on the cake. Our credit unions should be recognized for the time and effort they’ve put into these campaigns; they deserve to feel the full force of their success.”

The prestigious CUNA Diamond Awards recognize outstanding marketing and business development achievements in the credit union industry. The following projects that received Diamond Awards were created by Synergent Marketing in collaboration with our partners: 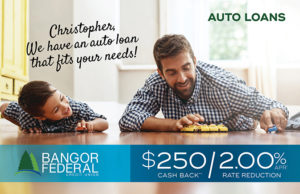 Bangor FCU wanted to provide a consistent approach in recapturing lending opportunities within their membership to increase their auto lending portfolio. Using a targeted marketing approach, they used data mining to identify nearly 1,200 members. Sending this one mailed piece, they increased their auto loan portfolio by 7%, with 119 new auto loans totaling $2,352,569 in new lending. This was an increase of 65% over the same time period in the prior year, and exceeded their marketing goal by 829%! 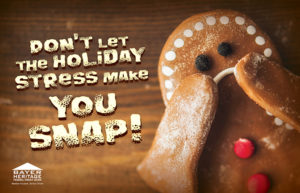 Every year, Bayer Heritage FCU does a special, well-known seasonal campaign that members have come to look forward to over the years. The Santa Helper Holiday Loan Campaign offers members interest-free holiday lending options to help with the stress of the holiday season. The goal of this campaign was to increase loans and assets while promoting community goodwill. This campaign targeted current members over the age of 18 who had joined the credit union in the prior year. It included one direct mail piece, flyer, statement insert, billboard, lobby monitor graphic, web banner, mobile app ad, and email graphic for employee emails. With 2,524 specific targets, the results were big. 420 Santa Helper Loans were opened, totaling $676,000! This successful campaign was 40% over their goal! 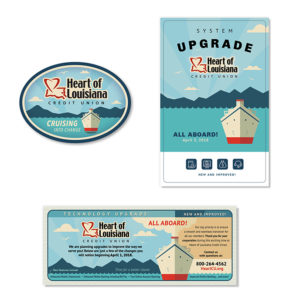 Heart of Louisiana CU was about to undergo a major, important system upgrade. To communicate this to members and staff, an impactful, playful, and meaningful brand awareness campaign was launched. Themed “Cruising Into Change” and “All-Aboard,” the campaign painted a literal picture of leaving a small rock of an island (their current system) and cruising to their new, all-inclusive resort (the new system). It also highlighted the new suite of products and services the upgrade would offer to members. 24,460 members were targeted three months in advance of the upgrade using a newsletter, email, poster, logo, booklet, and statement insert. The campaign was able to get members and staff excited about the changes that were taking place. 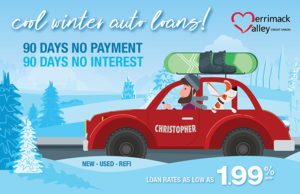 Using data mining, it was clear to see that current members were sending auto loan payments to other financial institutions from their credit union accounts. Merrimack Valley CU wanted to recapture these members with an offer to refinance their loans with Merrimack Valley CU. The postcard and email campaign was wildly successful, exceeding initial marketing goals by 960%! 349 new auto loans totaling $6,126,233 were refinanced, representing a 65% increase over the same period in the prior year. The campaign paid for itself in just three weeks! 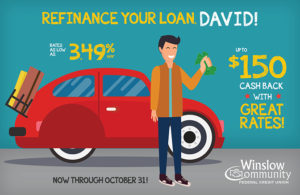 When Winslow Community FCU set out to encourage its current members to refinance an auto loan or open a new auto loan with their institution, they were hoping for a 10% lift in consumer loans. Using an eye-catching illustration to stand out in the mailbox, their targeted auto campaign exceeded their goal by 349%! They brought in $800,211 in new lending, which for their institution was a $673,570, or 532%, increase over the same period in the prior year! With production costs coming in at just $2,328.05, this was a huge win for Winslow Community FCU.